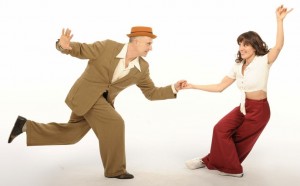 Our love for all styles of swing from Boogie Woogie & Balboa to The Collegiate Shag & The Lindy Hop is a big reason why we are so well versed in these dances today. It’s what drives us in our continued pursuit of excellence while keeping us grounded & good humored.

Our deep knowledge of the gamut of swing dance styles has brought us to showcase routines on some of the biggest stages in the world from Lincoln Center’s ROSE HALL in NYC to The Umbria Jazz Festival in ITALY.

In our workshops, we love sharing our knowledge and our joy for dance. Hopefully we will leave you with a stronger foundation of movement & vocabulary, improved techniques for partnering and an appreciation for the social dances that were born here in American in it’s heyday.

Paolo Pasta Lanna
Choreographer | Dancer | Producer | Designer
Paolo is a 20 year veteran of Swing Dance specializing in the Lindy Hop, Balboa, Collegiate Shag, Charleston and The Madison. He is also versed in the popular club style partner dances from Mambo to the Hustle. Paolo and his original partner Janice Wilson were the first Lindy Hoppers to TOUR with with Wynton Marsalis & The Lincoln Center Jazz Orchestra and in 1998 they won the American Swing Dance Championships. They performed with shows “Swing Dance America” and “Forever Swing” The Musical Revue featuring Michael Buble. Paolo co-founded and launched the first Summer Jamboree Dance Camp in Italy, The Shake, Rhythm & Roll Festival in Asbury Park, and he’s the creative director of the Swing Remix dance spectacular in NYC. He coordinates dance teams Lindy Hop All-Stars, The Rhythm Stompers, and continues to hone his skills of the American born social dances, teaching and performing throughout the world. Joined by his long time dance partner Laurentina, their recent tours in Europe have included LIVE performances with Ray Gelato & The Giants at the Umbria Jazz festival in Perugia ITALY and the San Sebastian Jazz Festival in SPAIN. They currently appear in and run their newest programs at LINDYLAND.com an online swing hub.

I first got a glimpse of The Lindy Hop back in 1994 / 1995 while attending a nightclub show at BIMBOS 365 Club in San Francisco featuring Sam Butera’s Wildest Big Band (the original members of the Louis Prima Orchestra), I noticed three couples on the dance floor with a very unique swing style. Just my luck, they invited me to the Steven Mitchell workshop (coincidentally that following weekend in CA.) and I was hooked on the Lindy Hop from that day forward.

Credits:
This site is all about the dance styles that grew out of the 1920s – 1950s featuring videos, photos, info about my workshops/classes, performances, schedule, tours and other nick nacks.

credit to the dancers I learned from directly such as Frankie Manning, Ryan and Jenny, Marcus and Barble, Steven Mitchell, Eric and Sylvia, Sylvia Sykes, The Rhythm Hot Shots, The Jiving Lindy Hoppers. Their inspiring styles and dedication to educating future Lindy Hoppers helped to shape me and what I do today.

And of course credits to all the ground breakin originators who came before them from dance groups like Whitey’s Lindy Hoppers & The Harlem Congaroo Dancers that featured dance greats like Frankie Manning, Al Minns, Norma Miller to those based on the West Coast like Dean Collins & Jewel McGowel who appeared in countless films in the 1940’s and 50’s providing us with remarkable historic dance footage. Without these dancers, we would not have had such an amazing collection of dance styles to bring back to life.